What’s the Strangest Slurry Solution This Expert Has Ever Seen?

Most of you know Reab Berry as our Resident Slurry Expert. While he’s certainly that — and so much more — some of you may not know just how far back Berry’s GIW Industries Inc. contributions go. Upon the eve of his retirement, we asked Berry to share a favorite memory. He’s solved some of the company’s trickiest slurry problems over the years; however, for Berry, there’s one that stands out as the most unique.

Berry started working for GIW as a student in 1963. He then began full-time work in 1966 while still retaining his duties as an ROTC commissioned officer. In 1967, Berry was called to active duty and sent to Vietnam as a helicopter pilot. Lucky for his friends back at GIW, he didn’t forget his slurry knowledge during his tour — in fact, he put it to good use! 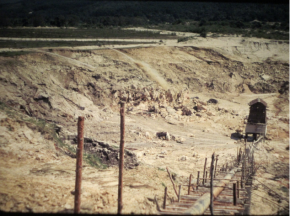 During his tour, Berry spent his second rest and recuperation period in Singapore. Tom Hagler, Georgia Iron Works CEO at that time, heard about this and sent Berry a letter asking him to check on a conversion unit problem in nearby Malaysia.

The client, at a tin mine, was having an issue in which only rocks 3 inches and smaller were passing through the pump while much larger rocks were left to block the system. The suspected problem was that the four-vane impeller was the culprit.

During his visit, Berry confirmed this was true and suggested mine personnel use a grizzly screen to fix their problem. He had seen such a screen used in a Florida phosphate mine during a previous field trip with Georgia Iron Works, so he used that knowledge to draw them a picture of the simple yet highly effective solution. 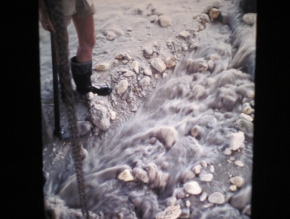 The next morning, Berry thought he would find a new grizzly screen in front of the pump; but instead, much to his surprise, he discovered 50-75 workers standing with their ankles about 3 inches apart. When rocks larger than 3 inches in diameter would hit their rubber boots, they would pick up the rocks and move them out of the way.

Tin company leaders said it was cheaper to hire the labor than to find the steel and weld it together for the grizzly screen!

In time, they obtained a replacement three-vane impeller to pass the larger rocks and didn’t require the metal grizzly. Berry will forever remember their short-term fix as one of the most bizarre slurry solutions he’s ever seen.

While retiring is around the corner for Berry, and we wish him a happy and healthy retirement, we couldn’t let him go that easily — he intends to continue imparting his experience and wisdom as a trusted consultant … when golf, family, and trips to the mountains of North Carolina allow. Thank you, Reab Berry, for your service, commitment, and camaraderie over the years. We wish you nothing but the best.

[cta]Do you have questions about the industry, our company, or our products and services? Email your comments and questions to PWelty@giwindustries.com.