Mine in Norway Saves $1 Million Each Year with MDX Pump 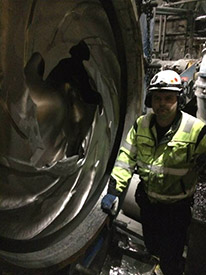 The operators of an iron ore mine in Norway were facing a dilemma. They had been dealing with a slurry pump that had a short wear life, requiring replacement of its wet-end parts every 350 hours. After the crew switched out the rubber parts out for a high-chrome impeller, the wear life increased — to about 450 hours. But the situation still required frequent downtime and maintenance routines.

The mine operators began to search for productivity and operational improvements with a pump engineered for their environment and their specific application.

The manufacturer of the mine’s pump didn’t provide any support or offer alternatives to improve the pump’s wear life, so the mine kept limping along for quite some time. KSB engineer Trond Lund saw what they were dealing with: “Quite a hassle with this pump, and they ran it like this for three years.”

KSB went into the mine in mid-2012. Lund and others from the KSB team received a tour of the facilities, and they took the time to learn about all of the operations. It’s impossible to make a solid recommendation without knowing details about the operation, the elevations, the production side, and other critical factors, explains Lund.

“The door opened when we got there,” he says.

After gathering detailed information, the team was able to estimate wear life and offer advice and recommendations. Finally, with the installation of a GIW MDX pump, the efficiency at the mine soared.

The iron ore mine

Located more than 900 miles northeast of Oslo, the iron ore mine has been a part of the local economy since 1910. From its opening until 1997, the mine produced about 200 million tons of iron concentrate. When the prices of iron plummeted in the 1990s, the mine closed its doors, but reopened in 2008.

Obviously, a mine with this longevity and production is a huge operation. Three open pits supply the ore that is processed in several different steps. After it’s extracted, the ore is taken to the primary crusher located nearby. Then the magnetite rock is separated from the waste and travels by rail to the concentrator. The mine sits some five miles away from the concentrator in town, so it owns and operates its own railway to transport the crushed ore. Both the train and the rest of the mine operate year-round.

Once the train full of crushed ore arrives in Kirkenes, it is dropped into silos and then sent through secondary and tertiary crushing. The finer rock is now ready to go through the primary mill. This is the point where the mine relies on a heavy-duty slurry pump to finish the processing; they push through 800 tons of solids per hour.

The GIW MDX pump increased the efficiency of the operation tenfold after it was installed. The previous wear life of 450 hours immediately grew to 4,900 hours. A primary reason for this dramatic improvement is that the MDX pump is constructed of GIW’s proprietary Gasite® white iron, which resists abrasion without requiring added thickness. Thus, the MDX pump has a large passage through the impeller that allows large objects as well as heavy volume to flow through. The all-metal MDX pump doesn’t have any rubber parts to come loose and cause problems down the line.

“Efficiency of our pump is much higher. Power consumption is much lower. Our pump is pushing 2,200-2,400 cubic meters through the pump per hour,” says Lund.

With the increased production and decreased power needs of the MDX pump, the mine expects to save $1 million per year.

KSB plans to continue its relationship with the iron ore mine. Upgrades of other pumps may be in order, but the most important part is to maintain the MDX pump that was recently installed. With proper service and maintenance, both the pump and the relationship should last a lifetime.

[cta]Do you have a challenging pumping situation? We’d love to hear about it. To learn more about how GIW® Minerals products can reduce production expenses for your company, contact us at 1.888.TECHGIW (832-4449) or visit www.giwindustries.com.[/cta]