A 4-component model for settling slurry pipeline friction losses has been previously described by Wilson and Sellgren. The goal of the present work was to collect a comprehensive and accurate data set spanning multiple flow regimes for the purpose of validating and calibrating the model. This was accomplished by obtaining four different graded silica and crushed granite products representing the four model components. These were then combined and tested in permutations from the individual components to the complete mixture at various concentrations. Primary experiments were carried out in a 203 mm (8 inch) pipeline with selected corresponding experiments repeated in a 103 mm (4 inch) pipeline for validation of pipe size scaling. In all, 40 tests were performed with particle sizes ranging from minus 40 m to 12.5 mm, d50 particle sizes from minus 40 m to 7.5 mm, and delivered solids concentrations from 4% to 38% by volume. Particle size distributions varied from very narrow to very broad, with d85/d50 ratios ranging from 1.3 to 30. Analysis of the data suggested the introduction of two new correlating factors which have resulted in good agreement between the comprehensive data set and the revised model.

Copies are €25 and can be obtained by emailing Joyce Raymond at jraymond@bhrgroup.com. 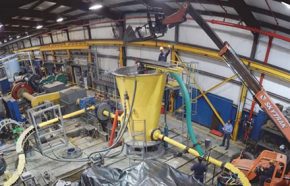 A research paper written by several GIW Industries Inc. experts is garnering a lot of attention, including a prestigious award for “Best Paper” at the 2017 Hydrotransport Conference.

An impressive group of in-house GIW experts — Robert Visintainer, John Furlan, and George McCall II — researched and compiled the paper “Comprehensive loop testing of a broadly graded (4-component) slurry,” along with input from long-time GIW collaborators and slurry course instructors Anders Sellgren of the Lulea University of Technology in Sweden and Václav Matoušek of the Czech Technical University in Prague.

They developed their research to validate and enhance the four-component model for settling slurry pipeline friction losses originally developed by A. Sellgren and K.C. Wilson — and to say they were successful would be an understatement!

The findings outlined in this paper allow users to more accurately predict slurry pipeline friction loss, pump spacing, and motor sizing, which will lead to more efficient power usage and slurry transport. This will be especially beneficial for customers in the mining industry who can rely on the results to select the best pumps and positioning for their applications.

“With this model, we can better predict friction losses as a function of pipe velocity, pipe diameter, and slurry properties,” explained John Furlan, GIW Senior Hydraulic Engineer and paper co-author. “It allows you to space the pumps appropriately and know how many pumps you need, what types of pumps you need, and how much power to supply to the pumps.”

How did they do it?

[sidebar]Abstract:
Comprehensive loop testing of a broadly graded (4-component) slurry Read Full Abstract[/sidebar]While the benefits of refining pump selection and improving efficiency are obvious, setting up a test program for the model was no easy feat.

“The idea was to come up with a test program that could actually test this four-component model,” Furlan said. “Part of the novelty of the research is actually how we did the testing itself.”

Slurry testing is nothing new, but the team did it better in a several different ways, one being the sampling mechanism design.

“We were able to come up with a tank design that allowed us to get a sample from the entire cross section of the slurry stream, and that allowed us to get a very representative sample of particle sizes that are actually going through the pipe,” Furlan said. “Another way we improved our method was by actually designing, implementing, and analyzing the tests with the aim of updating and validating the original model. That then gave model updates that resulted in a better match with our comprehensive set of test data.” 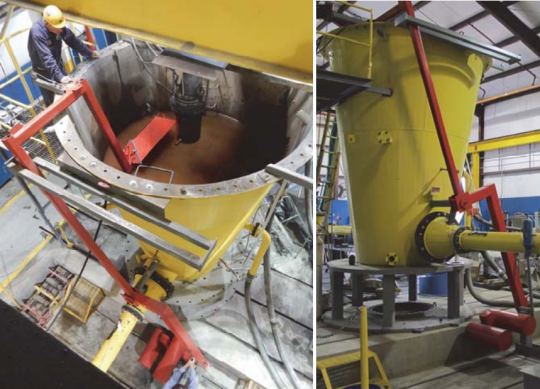 The research team developed a remarkably comprehensive loop test program. Their tests, which consisted of very carefully sourced components, featured a large, 203-mm diameter pipe loop and tank filled with thousands of liters of water. Researchers used an excavator to deposit various solids into the tank. Once they added the appropriate tonnage, they gradually increased the pipe velocity up to 7 meters per second, causing the particles to flow through the system.

“We used four different solid components: the fines, which are less than 40 microns; the 40-micron to 200-micron pseudo-fines, which consisted of very fine sand; the heterogeneous component, which was screened crushed granite product; and the coarsest stratified component, which was a granite/gravel product,” Furlan explained. “All of these materials behave differently in the pipeline, so they were added individually as well as in different variations.”

During these tests, the researchers would measure pipe friction with pressure taps installed in a horizontal loss section, observe the deposition velocity through a clear section of pipe with a camera, and take samples of the slurry to build the data set. The samples allowed them to measure the particle size distribution that corresponded to each set of friction loss and deposition velocity measurements. Pump performance measurements were also taken during the test program on all of the different slurry blend permutations.

After testing in the 203-mm loop was completed, the team built a 103-mm loop, completing two full sets of testing over the life of the program in order to verify that the model scaled well from one pipe size to another.

What makes their research even more incredible is the time and space required to complete it. The researchers began planning the test program in the beginning of 2016 with loop construction beginning later that spring. The scale of the testing was huge and included over 181 tonnes of solids as well as very large pipe diameters and loop components. The team tested through the summer and began work on the paper near the end of 2016.

“We lived and breathed the test program,” Furlan said.

Their dedication paid off.

“Based on what we saw from the data, we were able to make some changes and additions to the equations used in the original model. By doing that, we were able to get to average relative errors close to 6%, which is very good,” Furlan said. “We feel like the model in its new form — with some additions that are presented in the paper — does a very good job over a very broad range of slurries that actually represent what you see in industry.”

In fact, their research goes far beyond GIW.

It’s both an exciting accomplishment and a hallmark of GIW’s customer-focused commitment to have developed and executed this test and something that Furlan said sets GIW apart from others in the industry.

“Doing this in one test program that covers all of these different behaviors is a unique approach,” Furlan said. “It was a big test program on a big scale that’s unique to GIW. Few other labs out there could do it. It was very thorough.”

If you’re interested in learning more, copies of this impressive research paper are available for €25. For your copy of the award-winning paper, simply send an email request to Joyce Raymond at jraymond@bhrgroup.com.

[cta]We have the experience, capacity, and solid solutions necessary to meet your needs in every respect. If we can assist you in any way, please contact us at 1.888.TECHGIW (832-4449) or visit us online.[/cta]