As we reported in the September 2013 Flowsheet, GIW is busy working through the prescribed phases of an SAP implementation. SAP is an enterprise resource planning (ERP) software system that integrates and harmonizes business processes, enabling GIW to continue providing customers with exceptional products and service while meeting the demands of continued growth. SAP puts the management of all company resources into one integrated system, so it’s a smart choice for GIW as we strive for smoother workflows and better collaboration between departments. GIW’s parent company KSB, along with many of its subsidiaries, have already successfully transitioned to SAP, and GIW is following their lead.

Project Preparation: Assess, initiate, and plan the program
Prior to the August kickoff, project management met with KSB and system implementation consultants to assess the current state of operations and begin planning the launch of Project Evolution. Team members were chosen and grouped into process areas (such as production, sales, and finance) and aligned with dedicated KSB coaches and system implementation consultants. Throughout the first weeks, KSB coaches provided in-depth overviews of SAP P14 — the SAP template designed by KSB. These “knowledge transfer” sessions were integral to both the project team’s understanding of P14 and also in identifying differences (a.k.a. “gaps”) between P14 and current GIW processes.

Delta Analysis: Design the system
After knowledge transfer, the project transitioned to the Delta Analysis phase. During this phase, team members documented current GIW processes, collected business requirements for the future SAP system, and worked to find solutions to any identified gaps. Through documentation and collaboration, team members began to understand how future SAP processes will interact with each other and how data is transferred from current GIW software systems to SAP. In some instances, gaps were solved by developing custom software objects such as reports, forms, system enhancements, and system interfaces. Following many long hours working through gap disposition, team dynamics began showcasing the benefits of the new system: integration, harmonization, and improved communications.

Realization: Build and test the system
As the high-level phase timeline above indicates [photo], the team is currently progressing through the Realization (Build) phase. During Build, project team members begin to configure the SAP system. Configuration involves customizing the software to meet GIW business and operational requirements. System configuration and development objects are tested in a highly regulated environment. The Project Evolution team has a dedicated testing room where team members execute unit tests (testing individual areas of a transaction), scenario tests (testing integration between transactions within a process area), and integration tests (testing integration between transactions across multiple process areas). The intention — and expectation — of such stringent testing is to find defects or errors and correct those issues to maximize system efficiency.

GIW process leads are fully involved
Aside from being testers, GIW leads are wearing plenty of other hats of responsibility. They are working with the data team to ensure that “clean” data is migrated from the current GIW software systems to SAP. They are also working in conjunction with their consultant counterparts to create documentation that will be used to train end users of the system. GIW leads will be the trainers for the end-user instruction that will take place just before the system goes live in October of this year.

The project’s transition management team has been working with the GIW leads, KSB coaches, and system implementation consultants to define end users’ current roles and responsibilities as well as design a curriculum of courses that will be taught during end-user training. 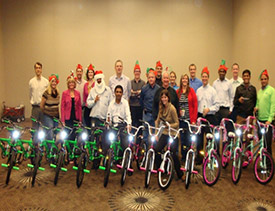 All work and no play?
Even with their substantial commitment of time and energy to Project Evolution, team members found time to support the local community this past holiday season. The Project Evolution team [photo] built 13 bicycles for underprivileged children, partnering with Chain Reaction Cycling in Evans, Georgia, and the CSRA Community Outreach Initiative, a local nonprofit focused on community outreach. This special community involvement “phase” of Project Evolution has helped mold the individual participants into a dynamic team that will move GIW into a new future.

Note: The Flowsheet will continue to cover the successes of the Project Evolution team as they get closer to the go-live date in October. Please be aware that our customers will see a change in the way paperwork and invoices look as we transition to SAP.