Distribution Done Right: How Do GIW Experts Do It?

At GIW Industries Inc., we realize how much of our success — and our customers’ success — relies on accurate and reliable inventory management. That’s why we’ve focused a huge amount of our time, energy, and budget on developing a state-of-the-art distribution center and a new outlook on inventory.

We’re excited to share that this facility not only improves the way we organize and move our parts but also allows us to give our customers the speed, dependability, and quality they expect from GIW professionals.

This massive 59,000-square-foot facility is impressive: It’s clean, organized, dust-free, and includes new energy-efficient equipment and LED lighting. It’s also very safety-focused: Our safety department members reviewed designs and approved decisions along the way. However, the most impressive feat may be the new level of accuracy and speed at which our team can operate.

Until we built this facility, a lot of GIW inventory had to be stored outside. Because the majority of our products are iron, once an employee located a product, he or she had to go to the paint department for rust removal, painting, and general reworking before shipment. GIW Warehouse Logistics Manager Mike Sharpton knew this was a time sink that the team needed to eradicate.

“The main goal behind the new distribution center was to eliminate this rework and make the building efficient,” Sharpton says. “Now we’ll be able to ship from stock much faster because everything that comes into the distribution center is ready to go.”

The GIW crew is in and operating under distribution center plan phase one, and we’re scheduled to complete phase two in nine to 11 months.

“At this point, we’ll have all our supplies under one roof, which will eliminate rework due to iron products being left outside,” Sharpton says. 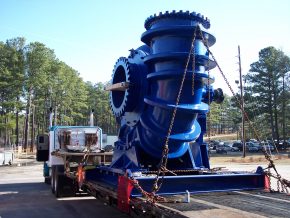 They originally designed the distribution center to have 18 feet between each storage rack, but Sharpton suggested designers use the floor space much more efficiently to nearly double the storage capacity by narrowing aisles to 7 feet.

Phase two will include another beneficial change as well.

“We just got approved to get the second set of racks and specialized equipment that allows us to safely store things higher and navigate the 7-foot-wide aisles,” Sharpton says.

While the team is looking forward to the changes coming with phase two, they’re celebrating phase one successes and the positive changes already taking place.

Getting to this point was a lot of work, though.

“We moved 20,000 individual pieces and parts into this building, which is about 2,400 different line items,” Sharpton says. “We checked every piece that was moved to make sure it was in pristine condition, properly skidded, ready to ship, and relabeled.”

If this extra attention to detail sounds intensive, it was — but Sharpton and the GIW team were committed to making the transition seamless and timely.
“It was quite an exercise, but we did it way ahead of schedule, during our normal daily business, and with no overtime.” He adds, “It was tedious, but everyone wanted to be absolutely sure we were on board for the annual physical inventory.”

And, when the time for physical inventory came, Sharpton notes that the extra preparation paid off.

Ready for the future

The best part of the new distribution center is that we designed it with the future in mind. GIW personnel want to be able to respond to customers’ demands quickly, efficiently, and safely for years to come, so this building is designed to grow and adapt to both supply and technology changes.

While it’s hard to imagine outgrowing this massive facility, we’re prepared for that, too.

“The north and south walls of this building were designed so that if we get to the point where we need to expand, we can move the walls out in either direction,” says Sharpton.

All these extra details will ensure this new, impressive building’s longevity and success. And as Sharpton points out, the distribution center’s ongoing dependability isn’t just great for GIW but also sets an exciting new standard for our customers as well.

“For customers, the response time for stock orders will drop tremendously and parts will be in pristine condition and clearly identified,” Sharpton says. “They’re going to notice a difference: We’re fast, and we’re confident in our new facility!”

Do you have questions about the industry, our company, or our products and services? Email your comments and questions to paaron@giwindustries.com.